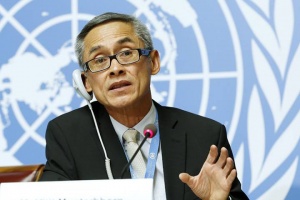 In July, the Human Rights Council agreed to the creation of the post in a 23 – 18 vote.

Munthaborn, a Thai national, is Professor in International Law at Chulalongkorn University in Bangkok. He was co-chair of the 2006 Yogyakarta Principles on the application of international human rights law based on sexual orientation and gender identity.

Munthaborn is appointed for an initial period of three years. His role will be to assess the implementation of existing international human rights instruments regarding LGBT people. Furthermore, he will raise awareness of violence and discrimination suffered by LGBT persons and engage in dialogue with states to implement measures.

Ulrike Lunacek MEP, Co-President of the LGBTI Intergroup, reacted: “All around the world LGBTI people continue to face discrimination and violence, sometimes explicitly legislated or encouraged by the state. These are severe breaches of human rights.”

“I am glad the Human Rights Council has reinforced its commitment to end these breaches by creating this position, and look forward to working with Mr Munthaborn in his new position.”

Daniele Viotti MEP, Co-President of the LGBTI Intergroup, added: “Earlier reports by the United Nations Human Rights Council have shown it clearly: homophobia and transphobia literally kill. We urgently need to up the pressure to end the unnecessary and extreme violence that our community faces across the globe.”

“I call on all states to cooperate with the independent expert so it can fulfil its full potential in fighting for the human rights of LGBTI people.”