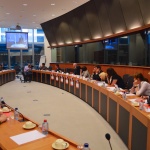 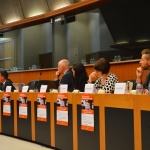 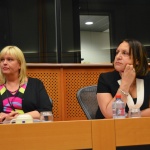 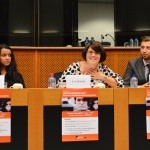 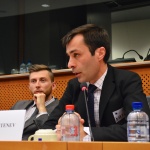 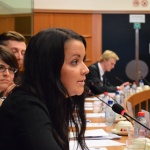 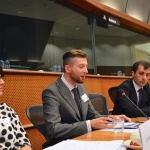 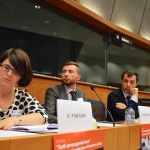 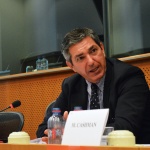 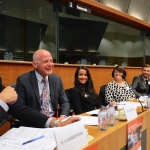 You can also view our “livetweet” of the event as it happened on Twitter.

Andrew Smith from ARTICLE 19 explained that from a legal point of view, freedom of expression includes the right to express one’s sexual orientation or gender identity, and to receive and impart information about them freely. This right cannot be restricted based on the majority’s prejudices.

Andrew Smith continued to explain that the “anti-propaganda” laws also impact other rights, such as the right to freedom of assembly during pride events. ARTICLE 19 recommended that the EU lead by example and promote the rights of LGBT people, and keep threatening legal sanctions against other countries.

Ms Paradis indicated that the significance of these laws varied from one country to the next. There is also a difference between individuals and organisations, the latter receiving such hefty fines that they would be, or are already forced to close.

According to ILGA-Europe, it’s also important to remember that the children’s rights argument doesn’t stand: the UN Committee on the Rights of the Child, including decisions and recommendations from over ten years ago, clearly says there is a need and a right for LGBT young people to have access to information on their sexuality.

Russian human rights lawyer Dmitri Bartenev from the International Commission of Jurists gave a legal overview of the situation in Russia. He pointed to the fact that legal definitions were usually poorly worded and vague. On one occasion, the Russian Federal Supreme Court found that ‘homosexual propaganda’ meant the direct promotion of same-sex relations. The Court emphasised that ‘propaganda’ did not include simply discussing sexuality, including homosexuality, nor public assemblies such as LGBT prides.

Ms Smirnova explained that the laws enacted in ten Russian regions so far (and in discussion at the federal level) had meant that some of the Russian LGBT Network‘s activities were already forbidden, even though there was no legal violation. The law also meant some NGOs could not work or register in some regions, working as a paralegal attack on LGBT people. All their information materials, including leaflets and website, had to be marked “18+”.

So far no organisation was charged with ‘homosexual propaganda’, only two individuals so far. In addition to the law itself, there are now very organised and targeted actions by homophobic groups, informally authorised or encouraged by the police. The ‘foreign agents’ law further complicates NGOs’ work, notably through increased administrative burdens, and administrative checks making their work impossible.

An already very bad situation was made worse by these laws, according to Stanislav Mishchenko from the Ukrainian Council of LGBT Organisations. He underlined that the phony draft Ukrainian anti-discrimination laws didn’t effectively protect LGBT people from discrimination. The far-right party Svoboda was described as very active in its attempts to limit LGBT people’s rights.

Mr Mishchenko also stressed that the threat of stopping EU visa liberalisation had worked so far, but that it was also important to provide positive incentives occasionally.

Concluding the event, EU Special Representative for Human Rights Stavros Lambrinidis stressed that taken together with the new ‘foreign agents’ law, the point of those laws is clearly to create a climate of intimidation and censorship. This achieves what liberticidal laws would, without having to go to court for instance. Mr Lambrinidis said he was in constant contact with Russian counterparts, and that he would try to take part in the next LGBT pride event:

.@SJLambrinidis: "The next time there is a #gaypride in #Moscow, I will go!" Woohoo! Go Stavros! Cc @ILGAEurope

Later this week the European Parliament will adopt a resolution on the rule of law in Russia which will mention these laws.