Persistent homophobia and transphobia in Europe, and new restrictions on LGBT people’s freedom of expression in Russia, Ukraine, but also in Lithuania, call for appropriate legal and policy responses.

Together with ARTICLE 19 and ILGA-Europe, the Intergroup on LGBT Rights organised the seminar Responding to homophobic and transphobic hate speech. ILGA-Europe and ARTICLE 19’s new policy brief Responding to hate speech against LGBTI people was presented. Under the chairing of LGBT Intergroup Vice-President Sophie in ‘t Veld, several experts and policy-makers took the floor. 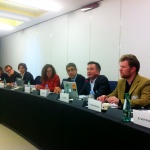 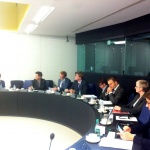 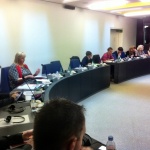 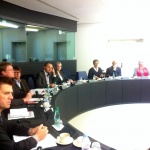 Opening the first panel “Policy challenges and human rights standards on combating homophobic and transphobic ‘hate speech’ and incitement”, Andrew Smith from ARTICLE 19 gave a brief outline to the paper “responding to hate speech against LGBTI people”. He addressed the difficult balancing act in responding to hate speech, which includes the need to safeguard both the rights of victims of hate speech, and the right of freedom of expression. Respect for both is necessary in a democratic society.

Coming from a society where homophobia is omnipresent, Artiom Zavadovsky from GenderDoc-M, the only LGBT organisation in Moldova, gave an insight in how hate speech is addressed by strategic legal action.

Rachael Kondak from the European Court of Human Rights‘ research division highlighted the considerations in balancing freedom of expression, as guaranteed by Article 10 of the European Convention on Human Rights, and the harmful consequences of hate speech which is not considered free speech and falls under Article 17. Furthermore, she addressed the question of coherence in the Court’s approach.

Closing the first panel, Stephanos Stavros from the European Commission on Racism and Inequality, a human rights body within the Council of Europe which consists of independent experts, discussed different ways of addressing hate speech. He highlighted that while there used to be a large emphasis on a punitive approach, more recently new approaches had emerged in which equality bodies, self-regulation and civil and administrative codes played a larger role.

Opening the second panel “Comprehensive policy strategies and consideration of tools to combat intolerance and incitement”, Joël Le Déroff from ILGA-Europe examined responses through policy action. There is a global need to address intolerance, not only by means of legislation, but also through comprehensive policies.

Deirdre Ní Néill from the Irish Department of Justice and Equality addressed how during the Irish Presidency, Ireland has embarked upon a holistic approach in addressing hate speech and the protection of fundamental rights and rule of law throughout the EU. She gave an insight in the recent developments in this area in Ireland, as well as on the EU level.

Coming from the Belgian Centre for equal opportunities and opposition to racism, Annelies Decat discussed hate speech from an equality body’s perspective. She highlighted that the impact equality bodies differs, depending on the mandate as well as on regional contexts.

Closing the second panel, Gilles Bon-Maury discussed French governmental actions during the equal marriage debate, and the national programme against homophobia and transphobia that was launched at the same time.