Yesterday, the European Parliament handed out the European Citizen’s Prize to Lydia Foy, an Irish transgender woman who fought for legal gender recognition.

Since 2008, the prize has been awarded to citizens or organisations who contribute to promoting better mutual understanding and closer integration between citizens or to facilitating cross-border or transnational cooperation within the EU. Lydia is one of the 48 citizens who have been awarded the prize this year.

Lydia Foy is an Irish transgender woman notable for leading legal challenges regarding gender recognition in Ireland. In March 1993 she applied for a new birth certificate to reflect her gender, which she was refused.

She started a 20-year battle to have her birth certificate reflect her gender identity.

In July this year, the Irish Parliament adopted a new Gender Recognition Law based on self-determination. 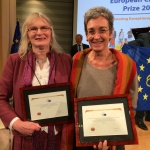 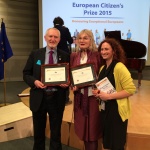