Yesterday, Commissioner for Justice and Gender Equality Věra Jourová presented a List of actions by the Commission to advance LGBTI Equality in the EPSCO Council, where the EU Ministers responsible for employment and social policy meet. 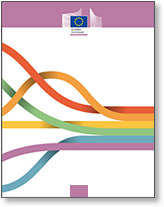 The list is to be seen as a follow-up to the Parliament’s demand for an EU Roadmap against homophobia, the so-called ‘Lunacek-report’, which was adopted in February 2014.

The document is not a ‘roadmap’ or ‘strategy’ as the parliament requested, but highlights actions in a number of areas where the Commission will be active on LGBTI issues, including anti-discrimination policy, freedom of movement for LGBTI families, workplace diversity, enlargement and foreign policy.

The Commission also foresees a communication campaign to improve the social acceptance of LGBTI people.

The list does not contain new legislative proposals, e.g. in the areas of hate speech and hate crime, or freedom of movement, as the Parliament had demanded in its report.

Ulrike Lunacek MEP, Co-President of the LGBTI Intergroup and author of the European Parliament’s roadmap report, commented: “I am very glad to see that Commissioner Jourová has listened to the Parliament and put on paper a list of actions confirming the EU’s commitment to further LGBTI equality inside and outside of the EU.”

“Homo-, lesbo- and transphobia make everyday lives of lesbians, gays and transgender people difficult, in many parts of the EU and even more so worldwide. They are severe and persistent phenomena, which require EU-wide coordination and action, and strong emphasis in support of LGBTI human rights defenders in other parts of the world.”

Daniele Viotti MEP, Co-President of the LGBTI Intergroup, added: “Although all content of this list is positive, it is a missed opportunity that the Commission did not want to go the extra mile. Many possible actions, for which parliamentary support exists, have been left out. This includes mutual recognition of civil status documents, and including sexual orientation and gender identity in existing EU-wide hate crime legislation.”

“We will continue to push the Commission to also work on these issues.”