On 5 September 2018, MEPs, NGOs and citizens joined together for an open mic in ‘celebration’ of the 10th year Anniversary of the Horizotal Directive. Organised jointly by the LGBTI Intergroup, the ARDI Intergroup, the Youth Intergroup and the Children Rights’ Intergroup, the event took place right on the Esplanade Solidarnosc, in front of the European Parliament in Brussels. 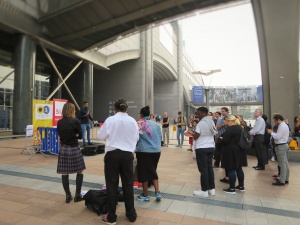 Daniele Viotti MEP, co-chair of the LGBTI Intergroup, welcomed participants and officially opened the open mic : “2018 is the time to take stock on the Horizontal Directive. Many MEPs worked hard on this directive. Many NGOs as well.

We are here to reflect on what can be done here and now about protection against discrimination in the EU.”

“A life with equal rights and without fear of discrimination should already be reality in the EU” also said in a video message Terry Reintke MEP, co-chair of the LGBTI Intergroup.

Presented by the European Commission in 2008, the Horizontal Directive was meant to provide protection against discrimination across the EU, in all areas of life, and irrespective of age, disability, sexual orientation or religious belief. However, in 2018, the Directive is still blocked in the Council.

Helga Stevens MEP, co-President of the Disability Intergroup, expressed her hope to see the European Council moving forward with the Horizontal Directive, while Julie Ward MEP, member of the four Intergroups organising the event, talked about the importance of working across political groups to foster equality in the EU – something that Intergroups do within the European Parliament.

Brando Benifei MEP, co-chair of the Youth Intergroup, vice-President of the Disability Intergroup and member of the LGBTI and Children’s Rights Intergroups, also emphasised the need to work together: “The European Union needs to be an example in fighting discrimination at all levels, in all cases, in all situations. We can do this if governments and Parliaments unite together to find solutions”, said

Jean Lambert MEP, co-chair of the ARDI Intergroup and member of other human rights Intergroups, reminded the audience that the already existing racial equality directive and the employment equality directive were groundbreaking legislation at the time, but only effective when fully implemented.

“This is about changing culture. So people feel free to be who they are, and their lives won’t blighted because of somebody else’s discrimination”.

This was corroborated by cultural organisations, also present at the open mic. A member of Fearless Cities spoke about the role of inclusive cities, while Eric Cyuzuzo from Guerrilla Resistance addressed the need for a decolonised education in order to promote diversity and fight discrimination.

NGOs working across the human rights spectrum were present as well, including the European Disability Forum, ILGA-Europe, Equinet, ENAR, Victim Support Europe and the International Federation for Spina Bifida and Hydrocephalus. All emphasised the dire need for EU anti-discrimination legislation for their own field of expertise and across the board.

« We need to make an anti-discrimination movement in Europe. We need to join forces. European legislation on non-discrimination will not be given to us. It will be won, and only if we put together a movement », as said by Yannis Vardakastanis, President of the European Disability Forum.