In April 2017, the Russian newspaper Novaya Gazeta reported that at least 100 men were detained in unofficial prisons on suspicion of being LGBTI in Chechnya, Russia, and suffered severe torture and humiliation. One year later, no transparent and independent investigation has been carried out, and victims are left without redress. 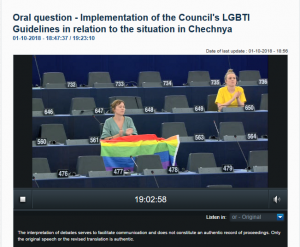 Therefore on Monday 1 October, and for the third time since May 2017, the European Parliament raised this issue through an oral question to the European Commission.

“Chechnya One Year On: this is not a historical event, but an ongoing atrocity”, said Lynn Boylan MEP, member of the LGBTI Intergroup.

“Condemnation is not enough. The EU and its member states must put more pressure on Russia and Chechnya authorities to finally start an investigation, and protect those who need to flee”.

The European Parliament first expressed its concern on the arbitrary detention and torture of men perceived to be gay in Chechnya in a resolution from May 2017. The text called on Russia to start an investigation as soon as possible, in cooperation with international human rights organisations.

In a resolution adopted in February 2018, the European Parliament repeated its call on Russian authorities to pursue genuine investigations into these crimes.

“The call for an independent investigation has been ignored and ignored again”, said Terry Reintke MEP, co-author of the oral question and co-chair of the LGBTI Intergroup.

With this oral question, MEPs highlighted again the role of EU institutions such as the Commission, the Council, and EEAS, in supporting civil society and the government in Russia to start a transparent and independent investigation, and offer adequate support and redress for victims.

In his oral answer, Christos Stylianides, Commissioner for Humanitarian Aid & Crisis Management, agreed “the European Parliament and the European Commission have over the situation in Chechnya a common concern” and that this was a “top priority issue” for the Commission. He mentioned the LGBTI Guidelines as a key tool in this regard.

Daniele Viotti MEP, co-author of the oral question and co-chair of the LGBTI Intergroup, also emphasised the role of external action in protecting LGBTI rights: “There some countries, one can be sentenced to death for being LGBT. In others, LGBTI people are put behind bars. We should draw some uncrossable lines, and make our intentions clear before we sign agreements with countries where such abominations take place.”

Commissioner Christos Stylianides concluded the debate by affirming the dedication of the Commission to keep following-up on the situation in Chechnya: “We will continue to work with members to support victims and authorities to start an investigation. We will look at how best we can use instruments available to us to support human rights and democracy”

Plenary summary: persecution of minorities on the grounds of belief or religion, resolutions on Western and Sahelian Africa, impact of war in Ukraine on women and Article 7(1)TEU on Poland and Hungary