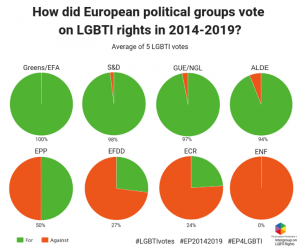 European citizens will soon elect new representatives, as European elections approach (23-26 May). As the 8th legislature ends, the LGBTI Intergroup reflects on what have been the key achievements and progresses related to LGBTI rights in 2014-2019, with a series of briefings and infographics.

The European Parliament, a key defender of LGBTI rights

The European Parliament remained a key defender of LGBTI rights among European institutions: over 120 texts adopted with LGBTI-inclusive wording, including 70+ reports and 50+ resolutions. Texts were adopted on issues across the board, such as stereotypes against LGBTI people in the media, conversion therapy, inclusive education, rights of LGBTI asylum seekers, free movement, legal gender recognition and intersex rights – with the first ever resolution on the subject adopted in 2019.

By coordinating the work of more than 150 MEPs, from 24 countries and 7 political groups, the Intergroup has contributed to landmark texts, such as the recently adopted resolution on the rights of intersex people.

The European Parliament has shown multiple times that is represents and defends the rights of all European citizens, in all their diversity.”

Read more in our briefings on what the EP & the LGBTI Intergroup have done for LGBTI rights.

How did MEPs vote on LGBTI rights?

A stable minority in the EFDD and ECR supported these LGBTI votes, a little under a third of the time (27% and 24% respectively).

Terry Reintke MEP, co-chair of the LGBTI Intergroup, commented: “In the past years, we have observed a stable support for LGBTI rights in the European Parliament because a majority of MEPs believe that LGBTI rights are human rights, and should be defended as such.

However this support cannot be taken for granted. These LGBTI votes show the importance of asking candidates how they stand on LGBTI rights in the run up of the elections. These elections are about what kind of Europe do we one: One that stands up for equality and human rights for all or one that pushes back into nationalistic and right-wing rhetoric.”

Read more in our briefing on how political groups have voted on LGBTI rights.

Other European institutions have contributed to furthering the rights of LGBTI people in the past five years. Two examples:

– the European Commission presented its LGBTI List of actions – first strategy document on LGBTI rights – in 2015, following the European Parliament’s request in the 2014 Lunacek report;

– the European Court of Justice ruled with the long-awaited Coman case that the right to freedom of movement applies to same-sex couples who married in an EU country and moved to another EU country that does not recognised same-sex marriage.

Read more in our briefing what the EU has done for LGBTI rights.

However, in the European Council, Member States have not always been unanimous on LGBTI rights. Twice in 2018, the Council could not adopt conclusions on texts related to fundamental rights because Poland in October 2018, and then Poland and Hungary in December 2018, did not want LGBTI rights to be included in the text.

Malin Bjork MEP, vice-President of the LGBTI Intergroup, said: “It is clear to me that there is a real threat from the extreme right and nationalist forces in Europe, and we must do more for LGBTI rights and equality.

Attempts to remove LGBTI people from texts on fundamental rights or blocking of texts in the Council – while LGBTQI people continue to face discrimination and violence across Europe – is a clear indication that our work is not over. All EU institutions must uphold the values of equality and non-discrimination.”

While we can celebrate achievements and progress at the EU level for LGBTI rights, much remains to be done to secure full equality for LGBTI people.

Ensuring the future of the Commission LGBTI List of Actions (expiring in 2019), filling the gaps in protection against discrimination, ensuring LGBTI people are protected in the reformed Common European Asylum System, securing the right to freedom of movement for LGBTI people and their families, supporting civil society… these are only a handful of examples of what the EU will need to work on in the next five years.

Sirpa Pietikainen MEP, vice-president of the LGBTI Intergroup, said – “For every progress we have made on LGBTI rights in this mandate, much remains to be done still. LGBTI people continue to be attacked, persecuted, killed, discriminated against or finding themselves in legal limbos – simply because of who they are.

We need to make sure that the European Parliament will continue to uphold its duty to promote full equality and protection for LGBTI people, inside and outside its borders.”

Plenary summary: equal rights for persons with disabilities, Association Agreement with Georgia and deliberations on citizens’ petitions in 2021

Plenary summary: New EU Strategy for enlargement, legal protection of rainbow families in light of the Baby Sara case and human rights in the context of the FIFA world cup in Qatar